5 Things You Didn’t Know About the Hudson Bay

Henry Hudson discovered the bay in 1611 during his search for the Northwest Passage. When he pushed his crew to continue their search for the passage after spending a harsh winter on the shores of the bay, the crew mutinied and set him adrift in a small boat on the bay. He was never heard from again.

2. Hudson Bay’s water is not part of Manitoba

Although the shoreline in Churchill is part of Manitoba’s territory, once you’re in the water, you’re considered to be in Nunavut.

3. Second largest Bay in the world

The Hudson Bay coast is sparsely populated, with only a dozen communities along it's shores. Many of these were once trading posts for the Hudson’s Bay Company, founded in the 17th century.

The Hudson’s Bay Company (HBC), famous for their iconic Point Blankets and their role in starting the fur trade industry in Canada, is named after this large body of water. HBC was incorporated on May 2nd 1670 and is the oldest corporation in North America (and is among the oldest in the world).

Bonus: Hudson Bay is the summer home of up to 50,000 beluga whales! 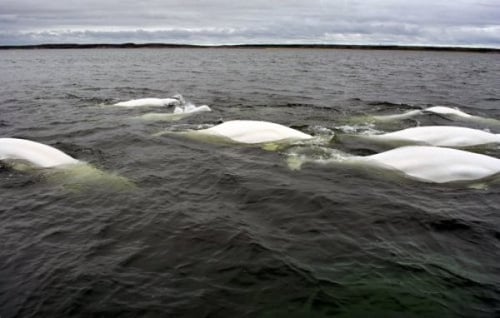 Each July and August an estimated 50,000 beluga whales migrate south into river estuaries that flow into the Hudson Bay. The whales use this estuaries as their grounds to feed, molt (shed skin), and give birth. The Churchill River estuary has approximately 3,000 beluga whales that swim through its waters in the summer.

Check out our Summer in Churchill video for some summer vacation inspiration!

Learn about our summer adventures.