The dogs at Wapusk Adventures are not like the dogs you find at a pet store or a rescue. Dave Daley’s sled dogs are a highly trained team of athletes. The first time I visited Wapusk Adventures another guest commented that the dogs appeared skinny. I nodded in agreement.

Dave responded, “Think of these dogs as athletes running a marathon. Do you ever see a fat marathon runner?” We all began to giggle. I realize how silly we were comparing the working sled dogs of Wapusk Adventures to our slightly overweight, indoor, urban, lap dogs. 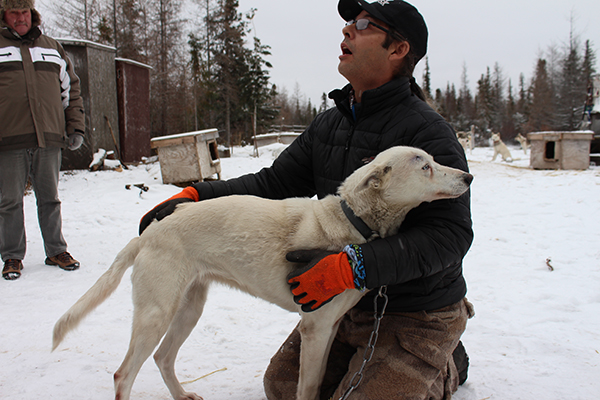 Once we get familiarized with the surroundings, and the location of the only washroom (an outhouse), Dave brings us into his warm, two-room cabin. The walls are covered with dog sled race photos, trophies, a colourful banner commemorating Dave Daley’s 1,200 km (746 mile) journey from Churchill to Winnipeg in 2010, items from Dave's Metis heritage, and a wolf fur tucked in the corner.

Dave quickly begins the interpretive program, explaining all the positions on a dog sled team:

Dave introduces us to one of his lead dogs and I am slightly surprised by the dog’s appearance and demeanor. She had an amazingly slight frame and had just finished weaning puppies. She can't weigh more than 18 or 23 kilograms (40 or 50 lbs). Her name is Venus and her sparkling blue eyes stand out against her dusty white coat. When Dave beckons her she slowly and respectfully walks up with her tail tucked between her legs.  A smile seems to creep across her face as soon as her head touches Dave's hand and she instantly melts into Dave’s arms, rubbing her face against his.

A short while later we are outside lining up for the Ididamile - Dave's tongue-in-cheek name for the track we are about to ride through. Dave and his assistant run two dog teams, taking two guests at a time on a one-mile route through the boreal forest near the dog yard. I eagerly raise my hand when Dave asks, “Who wants to go fast?” The first few runs of the day are always a few minutes faster than the last runs so I secure my spot near the beginning.

Before I sit down on the sled, Dave and his assistant grab dogs from the yard and attach them to their harnesses. The howling, screeching, and barking from the dogs is almost deafening. They playfully bite at each other’s ears and strain against their harnesses eagerly anticipating the run ahead. Once Dave signals for the dogs to go the team goes eerily silent, and soon all you can hear are paws on snow, panting, and the occasional command from Dave.

Now we’re going fast. The wind, which felt tolerable before, is now biting against my face. I should have worn a scarf! The short trees beside the trail are flying by and we go over a small bump that makes the sled jump so I hold on even tighter . Every once in awhile a dog turns around to look at Dave, as if it’s asking, “How am I doing?”

The Ididamile ends faster than I wanted it to. I spend the rest of the time visiting with dogs in the dog yard, playing with the new puppies, eating homemade bannock, and drinking hot chocolate. Once everyone has had a chance to take a ride Dave hands out souvenir certificates that say, “The bearer of this certificate has completed the “Ididamile” with Wapusk Adventures.”

As I walk back to the tour bus, I can’t help wondering if my family would notice if I ran away to become a dog sled musher.

Experience the excitement of dog sledding yourself on a Frontiers North Churchill Town and Tundra adventure!

Dave Daley began the Hudson Bay Quest in 2004 and has raced in it every year. The race has grown and evolved and is now a qualifier for the 1,600 km (994 miles) Yukon Quest from Whitehorse, Yukon to Fairbanks, Alaska.
Written by: Taylor Cole
Find Your Adventure
Start Looking