Beluga whales are the friendliest, most majestic creatures you can see on your summer vacation to Churchill. There’s nothing quite like heading out on a Zodiac and spotting a pod of whales swimming along, so close you could almost reach out and touch them. But the warming climate has created a change in their environment, including increased chances of disease and a higher likelihood of becoming prey in the wild.

How are the whales dealing with these environmental changes? 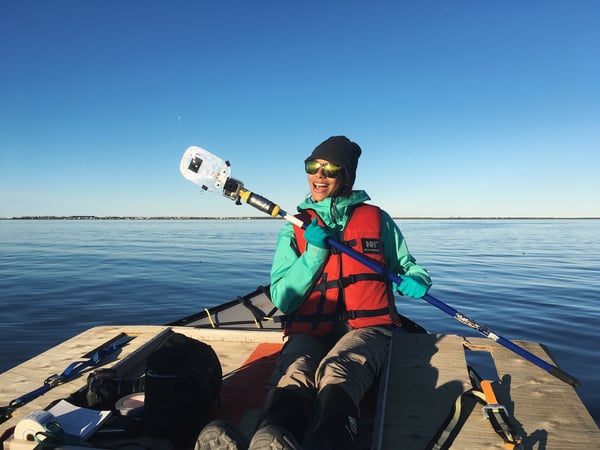 Meet Justine Hudson, a University of Manitoba master’s student who is currently studying the beluga whale population in the Churchill River estuary. Her study is focused on collecting data on these whales and testing for cortisol, the stress hormone, in order to determine the whale’s stress levels and discovering potential causes for their stress.

Her study can help provide insight into the population of animals that helped earn Churchill the title of Beluga Whale Capital of the World. The more we learn about these curious and cute “canaries of the sea,” the more we can do to protect them and their habitat.

So how is she collecting data for this important study? Catching the whale’s snot!

While boating next to a pod of beluga whales, Hudson and her team collect samples by extending a petri dish attached to the end of a painter’s pole and catching the whale’s snot as it comes out of its blowhole. She says the inspiration for her study came from the popular SnotBot, a drone from Ocean Alliance that flies over whales and collects their snot for research.

Hudson and her team are actual booger snatchers. She also makes light of the humourous nature of her work by using an unofficial #SnotForScience hashtag on Twitter when she talks about her study.

Although it’s an unconventional way of collecting data, the snot itself is packed with various hormones, so it’s a literal goldmine of information.

Unlike previous means of collecting data, which includes getting samples of their blood, skin and feces, collecting the whale’s snot is easier to obtain. This way of collecting data is also more efficient and non-invasive, rather than the traditional ways of sedating, capturing and re-releasing the animal into the wild.

“... Because it’s so non-invasive, you’re able to get so much more information,” says Hudson.

From Hudson’s field collection in Churchill last July, her and her team were able to collect an impressive 233 samples for testing. She hopes to collect more samples this summer when she and her team head back up to Churchill, and intends to use bigger petri dishes after observing the diluted nature of the samples she collected in 2017. Hudson also hopes to collect samples from the same whales tested last year, to pool with previously collected samples to create more potent snot for testing.

Hudson has since discussed her study to others in the science community, is now travelling across Canada, talking about the importance of whale snot and her study, most notably at the International Arctic Change 2017 Conference in Quebec City. She hopes that the bizarre nature of whale snot will help create important conversations about the subarctic wildlife and the challenges they face.

“The more that people know (about the subarctic), the better,” says Hudson. “We have this beautiful Arctic playground that’s exciting to see.”

This summer during your Churchill adventure, make sure to look out for Hudson and her team and say hello as they collect valuable data about these amazing animals!

Click here for more information on how to plan your own beluga whale adventure in Canada’s North.