Home > Blog > A Blast From The Past: The Churchill Rocket Research Range

A Blast From The Past: The Churchill Rocket Research Range

For centuries, people from various countries and cultures have looked to the aurora borealis in awe and bewilderment. The beautiful dancing colours in the sky were a mystery and the source of many questions and curiosity. Over time, with the advancement of technology and research practices, humans have come to understand this incredible light show and the science behind. In 1954, Canadian and US researchers stationed in Churchill were trying to answer the questions they had about the northern lights, like how does it affect long-distance telecommunications? To find the answers to these questions, these researchers started a program launching rockets into the aurora borealis to monitor its behaviour and learn about its impact on evolving technology. This led to the expansion of these research facilities over the next two years and in 1956 the Churchill Rocket Research Range was officially opened.

After greatly expanding research facilities and the capacity of the rocket range in 1956 it was decided that the site would be used to facilitate Canada's participation in the International Geophysical Year (IGY). The International Geophysical Year, was a two year research project where scientists from around the world came together to study various earth sciences, including the aurora borealis and airglow. Frequent rocket launches for the IGY experiments started in 1957, and continued until the site was closed again in December 1958 when the IGY ended.

The rocket range was reopened again in the summer of 1959, now operated by the US Army, in collaboration with the Canadian government, as part of its network of sounding rocket stations. During this time, the facilities were used to test new solid fuel propellant systems with PVT-1, the vehicle that would evolve into the Black Brant Rocket. Although a fire destroyed most of the range while conducting this research, the Black Brant test series continued with an additional twelve launches at NASA's Wallops Flight Facility during 1961-62, the research team in Churchill is credited with the invention of the Black Brant rocket. 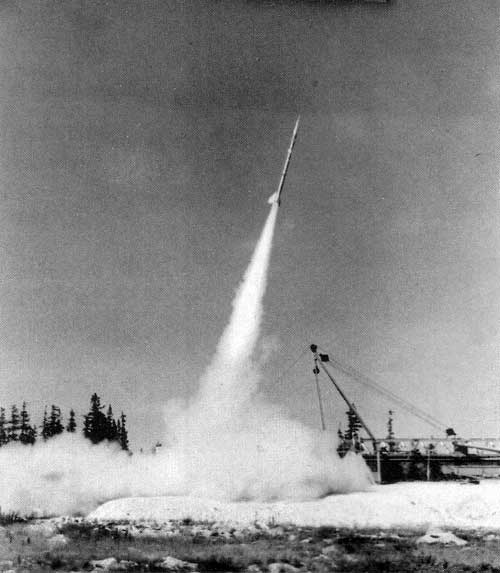 After rebuilding the facilities and continuing research, the US Army ended its involvement at Churchill in June 1970, and the site was taken over by the Canadian National Research Council to support the Canadian Upper Atmosphere Research Program. The site was used sporadically during the 1970s and 1980s, and was largely abandoned by 1985. Not long after being closed, in 1988, the Churchill Rocket Research Range was officially declared a National Historic Site of Canada. It was given this designation as it was long Canada’s foremost upper atmosphere research centre and a sounding rocket facility of international reputation.

In 1992, the deserted historic site saw new life as the Canadian company, Akjuit Aerospace, signed a 30-year lease with the Canadian government for the Churchill Rocket Research Range. They officially started their operations in Churchill in 1994 with the goal of developing the world's first commercial spaceport. Akjuit planned to use the site to launch commercial polar-orbiting satellites. Churchill's location in the western hemisphere combined with its range-safety for firing northwards made it an ideal location, with the exception of the extremely cold weather which would limit launch seasons.

Akjuit's first and only rocket launch took place on April 28, 1998: a suborbital Black Brant IXB research rocket containing a physics payload for the Canadian Space Agency. Unfortunately, due to issues with funding the project, Akjuit Aerospace ceased operations in the Spring of 1998.

Currently the Churchill Rocket Research Range shares its site with the Churchill Northern Studies Centre. The CSNC is a non-profit and multi-disciplinary research facility that hosts researchers from around the world. Although the range is no longer active, it remains a distinct landmark in the vast tundra and continues to spark people’s curiosity around the northern lights.