Whether you are a two-legged mom with kids or a four-legged mother with cubs, motherhood is no easy feat.

Check out the spectacular journey mother polar bears embark upon to provide for their vulnerable cubs and ensure the next generation of polar bears. They truly are the ultimate mothers of the North.


It All Starts With Fat

Polar bear mating season occurs between April and late June, typically when polar bears are hunting on the sea ice. After a successful mating, the goal of the female is all about packing on the pounds. A slim figure is not something that a female polar bear worries about and instead she spends her time trying to consume as many calories as possible.

Polar bears go though what is called delayed implantation meaning fertilized eggs will not implant until the fall and will only implant if she has enough fat stored up to sustain herself and her cubs through a long denning period. Not enough nutrients means no implantation and no pregnancy. However, should she have stored enough fat, the egg will implant in the fall and her long, arduous journey as a mother polar bear will officially begin. 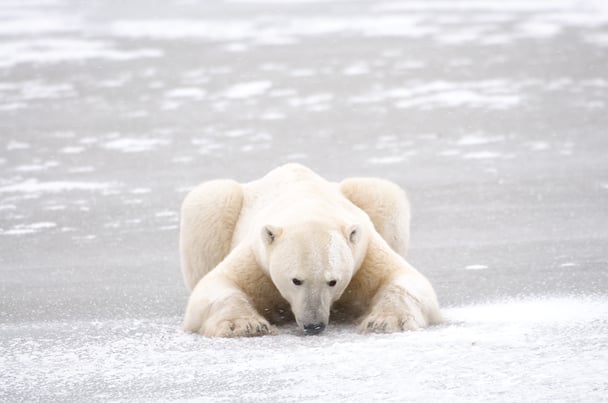 After a successful egg implantation, the next thing mother polar bear needs is a maternity den. Her den will become her isolated safe haven to have her cubs away from prying eyes and hungry male polar bears.

Polar dens often consist of small snow caves dug into snowdrifts and many female polar bears use the same denning locations year after year. Organizations such as our partners Polar Bears International are currently developing radars to detect and protect polar bear denning habitat. Once her den is ready, she will enter and wait for the snow to close the entrance, effectively sealing her away from the rest of the world. Female polar bears enter maternity dens sometime around late October. 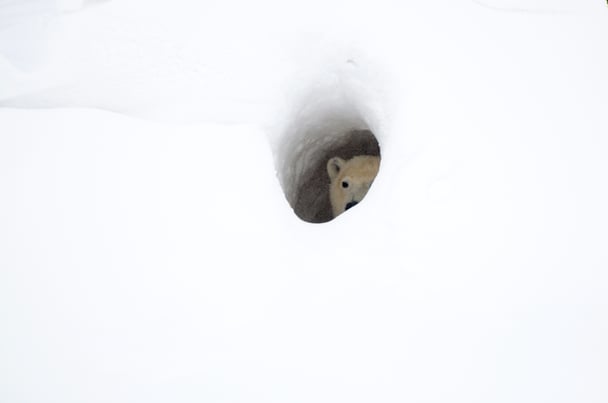 The Next Generation of Cubs is Born

After spending over a month alone in her maternity den, she will welcome new life to the subarctic giving birth in December to one to three cubs, although twins are most common. Cubs will be born blind, toothless and defenceless, weighing just over one pound.

For the next few months, she will remain in the dark safety of her maternity den, nursing her young cubs as they slowly get bigger and their eyes open. The new family will stay closely cuddled up in the den until the time comes for the cubs to follow their mothers into the world. 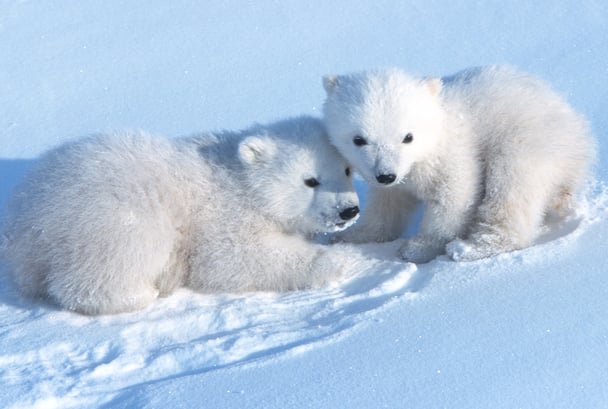 Leaving the Safety of the Den

As cozy as the maternity den may have been for the polar bear family, it will be time to leave sometime in March or April. Eventually, the mother will need to take them out into the world in search of food.

Female polar bears undergo one of the most prolonged fasting periods in the animal kingdom, giving up precious time where they could be out on the ice hunting seals to give birth and care for cubs instead. It is normal for female polar bears in the Western Hudson bay population to fast for eight months!

When she leaves the den she will be very hungry and finding food is critical to sustain herself and her cubs. The timing of when mothers exit the den with new cubs lines up with seal pupping season, providing plenty of hunting opportunities for mother bears. 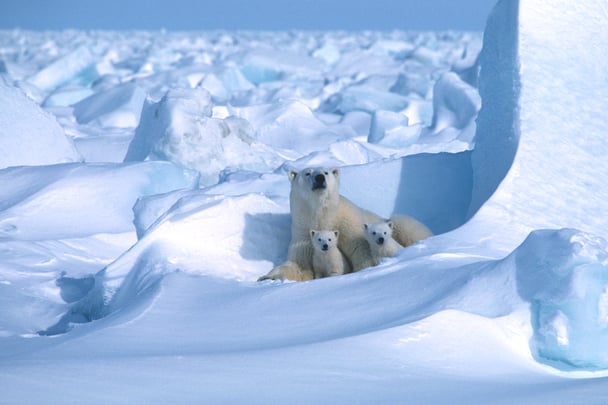 Learning to live in the subarctic

For the next two and a half to three years, mother polar bears continue to care for their cubs. She is their fierce defender and their faithful teacher, showing her cubs the ropes of how to be a polar bear. Cubs must utilize every moment by their mother's side as a learning opportunity as she shows them how to navigate the sea ice, when to return to the land and most importantly, how to avoid male polar bears.

Male polar bears will prey upon young cubs as a snack, especially during the fall when food is scarce and fasting periods have been long. Therefore, mother polar bears must always be vigilant and ready to charge into action to defend their cubs when necessary. 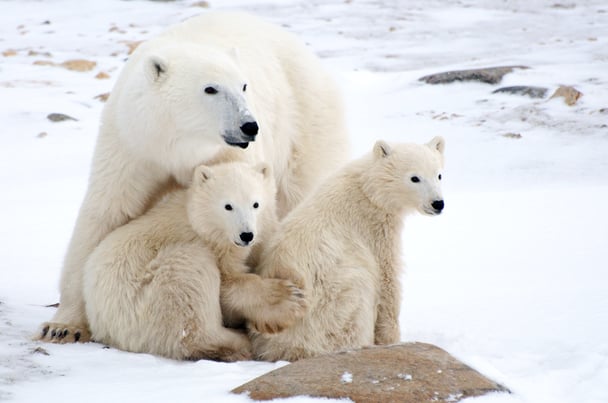 Eventually, she will have done all that she can for her cubs it will be time for them to walk their own path and perhaps even raise cubs of their own. For the mother polar bear the departure of her cubs means it is time to find something to eat and start the cycle all over again.

A huge pat on the back to all the mother bears who work tirelessly for years to bring the next polar bear generation to the tundra. If you want to learn more about polar bears or how you can help support them check out Polar Bears International (PBI). PBI is the only not-for-profit dedicated solely to the conservation and research of wild polar bears.