Home > Blog > Why the Figure is Missing From Our Logo

Why the Figure is Missing From Our Logo

July 1, 2021 — Nobody gets new ideas and future roadmaps 100% correct straight out of the gate, us included. As time goes by we learn and grow, and as new information becomes available, the ideas that we developed in the past need to evolve to incorporate any new understanding. This doesn’t mean erasing history, but rather acknowledging change is sometimes needed. When it comes to our visual identity (i.e. the Frontiers North Adventures logo), our inspiration has always been to keep our guests at the centre of all that we do. Accordingly, our logo is not a polar bear, beluga whale or the northern lights. It was in the early 2000s when we established a visual identity for Frontiers North, the development of our brand was inspired by elements of classic travel, khaki textiles, guides with clipboards, DC-3s, Indiana Jones and themes from 1800s exploration in Canada’s North.

We honed-in on this visual identity because it provided the company room to grow and didn’t pigeon-hole Frontiers North as only a polar bear tour company. The context here is that, at the time, our autumn polar bear trips accounted for the majority of our business and we had to make a conscious decision about what we hoped the future might have in store for our company. We actually did a pros and cons list of just calling ourselves Tundra Buggy Tours but decided that Frontiers North Adventures provided us more opportunities to host guests in Canada’s North, which has always been our passion. That was almost 20 years ago.

In August 2015 we finalized an overhaul of the Frontiers North Adventures logomark which we’d originally developed in 2003. At that time it was our intent to modernize what we’d been working with, which had been well-received by guests, prospective guests and industry colleagues. It was during this 2015 logo overhaul that colonial references in our logo had been flagged. It was raised, given the release of the Truth and Reconciliation Commission's final report including its 94 Calls to Action just a couple of months prior, that we go back to the drawing board and come up with a completely new visual identity for the company.

I take responsibility for brushing aside those concerns, at the time rationalizing that our logo resonates well in our target markets, and that closer to home few people pay attention to our tourism company — whose focus is attracting foreign travellers to northern Manitoba. What I failed to acknowledge but have since learned is that our guests are just one subset of Frontiers North’s stakeholders, which also includes our staff, the environment, the community members of Churchill, future generations, and more. We operate on Treaty 1, 2 and 5 territories, which include the traditional and ancestral lands of the Cree, Dene, Inuit and Métis people.

Members of our team and many Churchill residents are Indigenous and are very much aware of and subject to colonialism; whether it be the lasting effects of Canada’s more than 100 years of residential schools, or systemic inequality and oppression that still exists today. In 2015 I failed to take into account how the colonial interpretation of our logo could be affecting Indigenous people.

For the next couple of years we started to explore and understand what our company’s role might be as it relates to Reconciliation. What was clear to me is that I didn’t know what I didn’t know, so in 2018 and with colleagues at the Canadian Museum for Human Rights, we developed a program in which our entire team would participate. We flew our Churchill-based team members to Winnipeg and our entire team of ~35 full-time staff participated in an Indigenous Learning workshop which, for many of us, was the first time we really understood the complexity, scale and negative impact of Canada’s residential school system on Indigenous people. I recall feeling confused that in all my schooling, the impact of residential schools was not curriculum. I felt ashamed that at 40 years-old I was learning most of this for the first time.

The outcomes of this workshop included our entire team’s better understanding of the Truth and Reconciliation’s Calls to Action, especially Call to Action 92, which calls upon businesses and their teams to become invested and involved in the Reconciliation process. Since that time, our company and our team has kept Call to Action 92 in our sights. We have a ways to go, but I think we are headed in the right direction. As well, by the end of the workshop our whole team acknowledged to each other that our Frontiers North logo leans heavily on colonial themes. If this issue wasn’t out in the open before, it was now.

The rub for me has been that through all of this, our company’s values, our brand and how people perceive our company hasn’t really changed. If what informs our visual identity hadn’t changed much, then I didn’t understand how a new visual identity would be any different than what we had. As time went by, I didn’t prioritize decolonializing the Frontiers North logo — so it didn’t happen.

Then a few weeks ago, reports surfaced of the unmarked graves of 215 Indigenous children at a residential school near Kamloops, B.C. (since this initial report the number of unmarked graves at residential schools across Canada continues to grow). I read the reports on a Sunday, and like many Canadians was heartbroken for the children and families forced to live and die this reality. I reached out to our marketing team to immediately update our social media logos to monochromatic orange to honour the children and survivors and to bring awareness to the matter with our audiences. It felt like the least we could do. 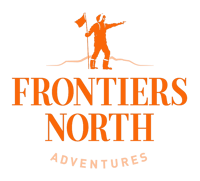 At the same time, we acknowledged that a hot-take on this matter from Frontiers North was not what was wanted or needed. We felt this deserved an Indigenous voice and, as a tourism company, we reached out to our colleagues at the Indigenous Tourism Association of Canada committing to amplify their voice and message.

Shortly thereafter, our marketing team pointed out the irony of us taking our colonial-looking Frontiers North logo, turning it orange (leaving all else unchanged) and publishing it like that. Which brings us to this. We don’t intend to make a big deal about it, but wanted to have an answer prepared in the event we are asked, “Why this? Why now?” 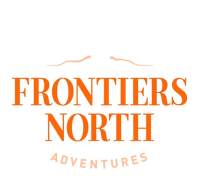 Starting today with the logos in our social channels, the figure in the Frontiers North logo will be missing. We’ll continue to roll-out and manage this change until we have the capacity to conduct a proper revision of our Frontiers North Adventures visual identity and free it of colonial themes and interpretation. I regret it’s taken my recent awareness of the heinous events that have taken place at Canada’s residential schools to better honour Indigenous voices from the communities we work with.

We understand that this small action is the beginning of a process, not its end. We have a long road ahead of us and I think the point is that we are on it and recognize we need to do better. It’s not the responsibility of our Indigenous partners to advise us, it’s our responsibility to learn.

One of our goals is to share with our guests the customs, history and culture of the people in Canada’s North. A challenge we will continue to address with our “vacationing” guests, who may not see it coming, is how to best honour and share the important history of Indigenous people from Churchill, including the scar tissue that remains from hundreds of years of colonialism.

Our team frequently discusses our purpose as a company and what motivates us to get to work everyday. It boils down to our desire to be good partners, and share in the stewardship of these lands. We are committed to listen and learn as we take these important next steps. We accept and acknowledge our responsibility to leave our communities and environments in better shape than they were found, for future generations to experience, appreciate and conserve as we do.