Bored of Beach Holidays? 7 Northern Vacation Ideas for the 40+ Explorer 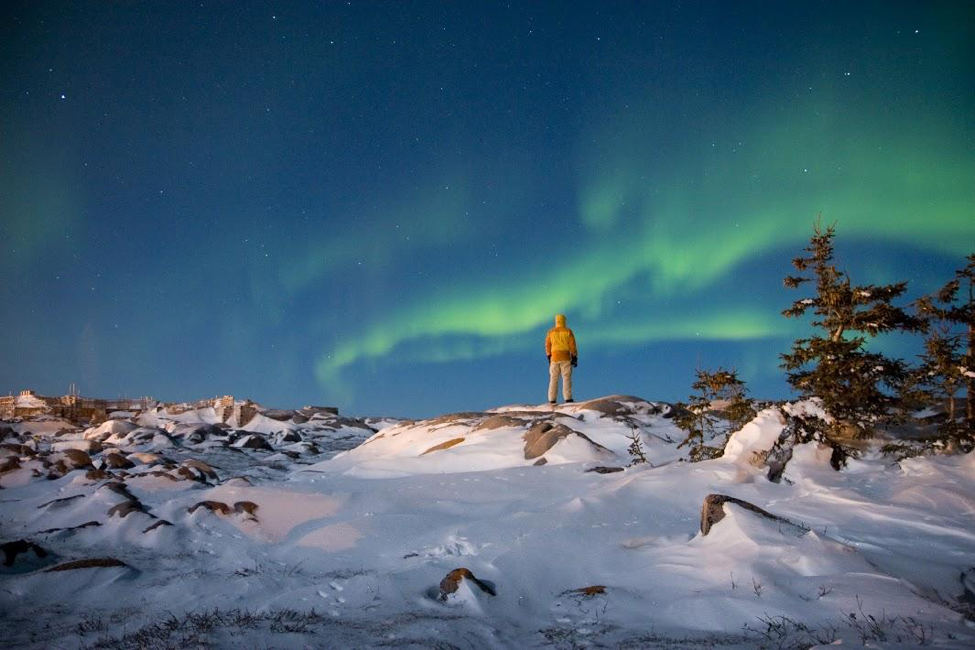 Aren’t you ready for a different kind of vacation this year? Nothing compares to land where polar bears roam, thousands of white beluga whales gather, and the northern lights dance in the night sky. So sure, you could take another beach vacation, but wouldn’t you rather see some of the rarest sights in the world? You won’t regret saying goodbye to the sand and hello to the snow of Churchill, when exploring these seven northern vacation ideas:

Besides Winnie the Pooh, polar bears might be the most beloved bears in the world. Watching them frolic and play from a Tundra Buggy warms your heart even on the chilly tundra. But our furry friends need our help as their environment is changing and disappearing beneath their feet.

Team up with Polar Bear International and learn how to help these amazing animals before they lose even more of their homes. Polar bears live on the ice. As it shrinks due to climate change, the bears lose their habitat. The ice also connects them to their main food: seals. As the ice melts, there are fewer places to find seals, taking away the much needed food source for the bears.

How can you help the polar bear? Honestly, by traveling to see them. Seeing is believing, and when you educate yourself on this incredible mammal, you’ll go back and tell your friends and family about what you learned. As more and more people become aware of their great need, more help can come to the iconic polar bear. 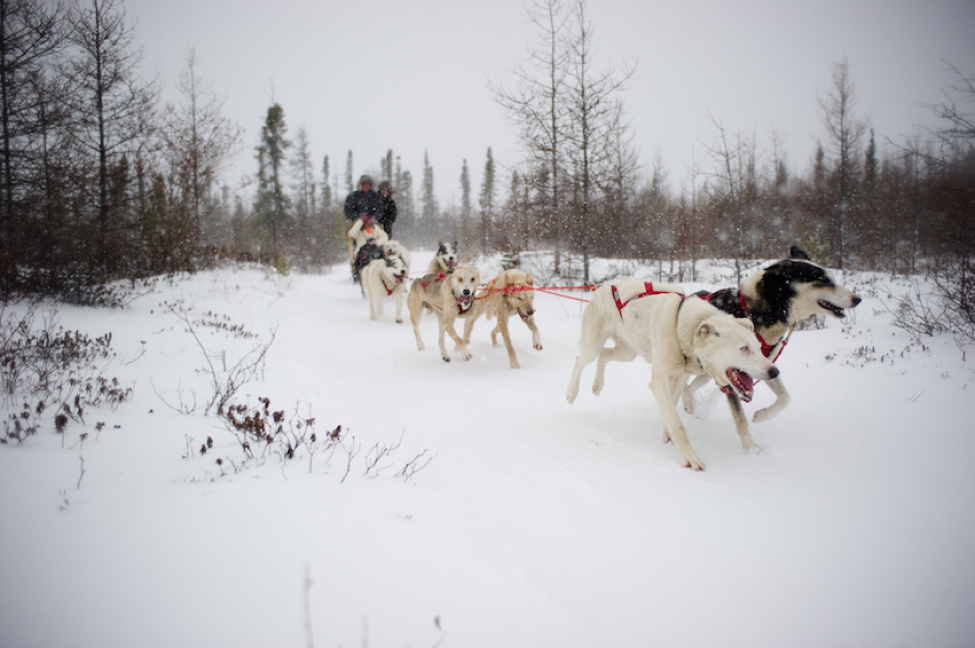 Admit it — ever since you were a kid, you’ve wanted to go dog sledding. And who wouldn’t?

Dogs are man’s best friend, and sledding is a classic snow activity. Put them together, and you have a match made in tundra heaven! Sled dogs are pretty amazing. The amount of dogs to a sled varies, but their “positions” do not. The lead dog sets the pace for the team and is both fast and intelligent. Directly behind the lead are the swing dogs, who help with turns and curves. The final two in the rear are the wheel dogs. They are usually the largest and strongest of the group. Team dogs make up the middle to give more “dog power.”

The most famous sled dog is Balto, well-known for his heroism in bringing much-needed medicine to Nome, Alaska, in the 1920s. Your kids probably watch the animated 1995 movie, Balto, or perhaps you’ve seen his statue in Central Park.

On your Churchill adventure you can enjoy a mile-long sled ride through the boreal forest and experience the tundra like never before.

3. Africa gets all the Big Five glory, but you can see Manitoba’s Big Five on a northern Safari.

Ever heard of the Big Five in Africa? Well, Manitoba’s got a Big Five all its own, and they are just as remarkable and mighty.

Begin your search in Riding Mountain National Park for moose, bison, and black bears. Did you know moose are the largest of the deer species? In fact, their shoulders reach between 5 and 6.5 feet. Bison, once down to only 600 in the wild, have made an extraordinary comeback. While there are about 500,000 total, only about 5,000 roam free, but what a tremendous increase from less than 1,000 only decades ago. Black bears are North America’s most common bear, but it doesn’t mean they are any less interesting to see! Did you know not all black bears have black fur? See if you can spot any with blue-gray, blue-black, cinnamon, or even white fur!

Head north to Churchill for the final two animals on this tundra safari. Beluga whales congregate by the thousands in Hudson Bay every summer to feed and give birth. Cruise across the bay for your chance at a glimpse of this curious sea creature. The final member of Canada’s Big Five is the polar bear. Take a Tundra Buggy tour in the Churchill Wildlife Management Area for the best chance at seeing the lovable white bear. Churchill, known as the “Polar Bear Capital of the World,” makes an ideal location for your subarctic adventure.

4. Want more belugas? Summer in Churchill is the place to be.

What’s the best way to cool off in the summer? Heading to Canada’s North, of course! And nothing could be “cooler” than doing some whale watching. But not only can you see the beluga whale from a boat, you can get up close and personal with an excursion!

Beluga translates from the Russian word for white (bielo), and their melon-like head shape aids in echolocation. They are known as the “canaries of the sea” for the wide variety of vocalisations they can make. Summer in Churchill provides a beautiful backdrop; the flowers in full bloom adorn awe-inspiring landscapes, so be sure to pack your binoculars and camera to take in these spectacular sights.

5. Forget candlelit dinners: how about an exclusive gourmet meal under the Northern Lights?

Can anything compare to seeing the northern lights in person? It's one of Mother Nature's greatest shows on Earth. Watch them dance and change colours across the starry night sky for a truly tranquil experience.

What if you could not only see the northern lights, but also dine under them? That experience is made possible at our exclusive pop-up restaurant, Dan's Diner. Here, you'll travel across the frozen Churchill River to eat a sophisticated multi-course meal under the aurora borealis.

6. Get up close and personal with the arctic wildlife at the Tundra Buggy Lodge.

You’ve read a lot about the Tundra Buggy, but did you know you can stay in the Tundra Buggy Lodge? The lodge sits in the heart of polar bear country, so you can literally wake up and see a furry friend right outside of your window.

Six different units make up the lodge — two for guest accommodations, one for the staff, a dining hall, a lounge and a supply car. Polar bears are not the only wildlife to be seen around here. In the past we've seen caribou, rabbits, arctic fox, willow ptarmigan and more amazing animals roam in the lodge's vicinity.

Remember to bring your camera, as you never know when a great photo opportunity will pop up!

7. Why cruise the Caribbean when you can experience living history on a Northwest Passage cruise?

Carving out the path of the Northwest Passage was no easy feat. Many explorers lost their lives over many centuries trying to find the best route through the Northwest. Henry Hudson, discoverer and namesake of Hudson Bay, was abandoned by a mutinous crew for leading them to the iceberg-infested sea.

After many centuries and many explorers gathered information about the arctic waters, the Northwest Passage became navigable. Roald Amundsen, a dutch explorer, finally completed the voyage, though it took him three years, from 1903 to 1906.

These days, the waters are not so treacherous, though adventure-lovers still seek them out for a spirited voyage from the shores of Greenland, through arctic fjords, by icy islands, and end up in Canada’s northern frontier. Head into the Arctic Circle while stopping in Greenland’s Ilulissat, which translates to “icebergs.” And when you arrive, you’ll understand why—icebergs dot the nearby sea.

Also of interest is Devon Island, the largest uninhabited island in the world. There are a few mountain ranges here as well as the Haughton impact crater, created by a meteorite millions of years ago. Cruise through the Northwest Passage in style on the Endeavor, an ocean liner specifically built for these icy seas. With room for only 198 passengers, you’ll experience an intimate trip, unlike the big liners of the Caribbean.

Is Canada calling you?

Take a break from the beach and visit Canada’s incredible North for change — you’ll be glad you did. Get in touch to start planning your ideal itinerary for an adventure to Churchill. Or if you’d simply like more information, sign up for our free email course today.