Located in Canada’s North, Churchill is a spectacular place for wildlife viewing with unrivalled polar bear and beluga whale encounters on the planet. It is the perfect place for the shutterbug or wildlife enthusiast to embark on the adventure of a lifetime.

If you are considering heading to Churchill in summer to seek wildlife take a look at the species listed below to get an idea of what you might find and when. Much of Churchill’s wildlife is seasonal, with specific times of year for viewing.

Check out our Wildlife of Churchill: Autumn blog as well. 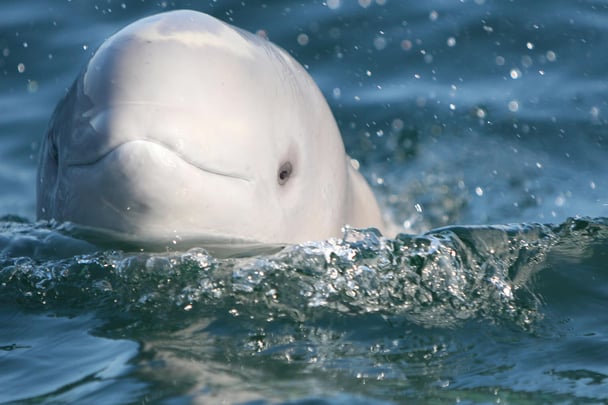 Churchill has earned the title of being the beluga whale capital of the world for a good reason. Each summer, over 60,000 beluga whales migrate back into the Hudson Bay area, and many female belugas embark into the Churchill River to raise their young. Immense and majestic, the beluga whales of Churchill are hard to miss as they seemingly fill the river, and their curious nature often implores them to investigate the whale viewing boats.

The red fox is a year-round resident in the Churchill Wildlife Management Area and is often spotted by guests on our Tundra Buggy adventures. These curious creatures are quick, graceful and inquisitive. Red foxes can be spotted in three different colour morphs: red (most common), silver(pictured in the photo above) and cross (rarest). The foxes of the Churchill area can make for some phenomenal photo subjects as sometimes their curious nature implores them to come a little closer to check out what is going on. 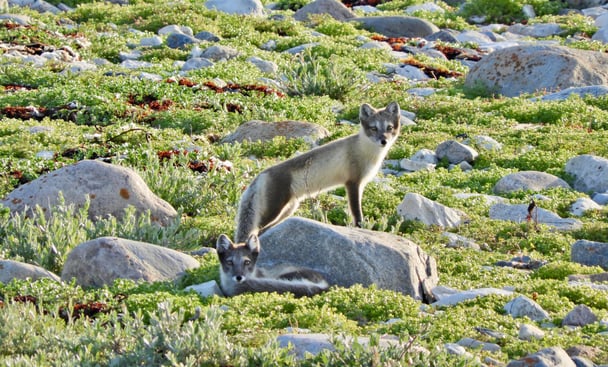 Chance of sighting: Medium to High depending on cycle

Arctic fox populations go through cycles that will determine the odds of spotting one during a trip to Churchill. A year-round resident of the Churchill area, arctic foxes, are one of the smallest subarctic mammals (weighing the same as a house cat) to not hibernate during the harsh winter. Quick moving and almost always in motion, arctic foxes make for a fun photo subject when they make their appearance.

Caribou undertake some of the most impressive migrations, and their summer range includes the Churchill Wildlife Management Area, where some caribou will return each summer. The caribou of the Churchill area are considered woodland caribou though they behave more like barren-ground caribou. There are two herds in the CWMA, the Beverly Qamanirjuaq in the West and the Cape Churchill herd to the east. In the summer, they like to spend time along the tidal flats where it is cooler and breezier, providing relief from bugs.

Moose are common in the Churchill area, but the odds of sighting them are low as these large ungulates prefer to spend most of their time hidden away in the boreal forest. The best way to view moose in Churchill is by taking a helicopter tour to spot them amongst the trees from above the boreal forest. The best moose viewing opportunities offered on our trips are through Canada's Big Five Safari, where guests first visit Riding Mountain National Park before heading to Churchill.

Arctic hare are often a grey-brown hue in the summer months as their white winter coat is replaced. They are often spotted in amongst rocks or willow bushes foraging and sitting still to avoid detection by predators.

As the sea ice melts, polar bears return to land, and some will hang out along the shores of the Churchill River and Hudson Bay during the summer months. A Tundra Buggy adventure into the CWMA or a zodiac boat is often the best way to spot polar bears during the summer. Compared to autumn, polar bears are much less active and spend much of their summer days laying down, conserving energy and trying to keep cool. 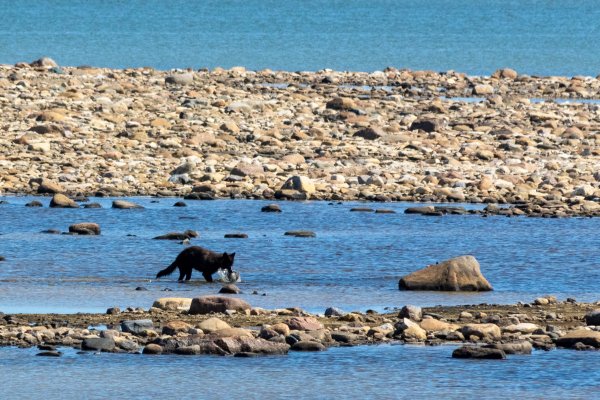 Churchill has a population of grey wolves known to live outside the town. Though they are not uncommon in the area, grey wolves are a rare sight for human eyes as they often prefer to keep away from locations that people frequent. On rare occasions, our guests have seen these elusive animals, such as in the summer of 2019 when the photo above was captured by one of our guests. As pack-based animals with strong social relations, there are good odds that if you spot one wolf, its pack members are not far away.

It is not hard to see where they get the name when looking at a bearded seal. Their long white whiskers and "squared-flipper" shape are the best ways to identify a bearded seal from others. They are the largest of the seal species around Churchill. Though they are in the area, bearded seals are much less common than ring seals. Bearded seals are not often spotted because they usually spend most of their time out in the water or hidden on the shore, where they are hard to spot.

The ringed seal is the smallest pinniped in the area, and it is estimated that the population of ringed seals in the Hudson Bay area is 40,000. They are the most likely to be spotted of any of the seal species in the Churchill region. Ringed seals are rightfully wary creatures as they have many predators in the area, such as polar bears, arctic foxes, wolves and wolverines. Though ringed seals are in the area they can be hard to spot as they generally spend most their time out in the water or along the rocky shore of the Hudson Bay. 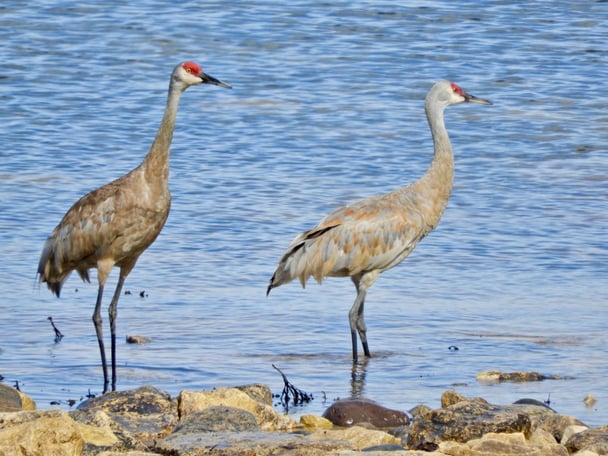 During Spring-Summer Sandhill Cranes migrate back to the Churchill area to breed and raise their young. You will find these large and impressive birds most often around the edges of bogs and marshes as their preferred nesting sites. Elegant and graceful Sandhill Cranes make for excellent photo subjects. Some lucky guests may even get to hear the rolling trumpeting call of the Sandhill Crane that is a unique low baritone thanks to the long windpipe a Sandhill Crane has. 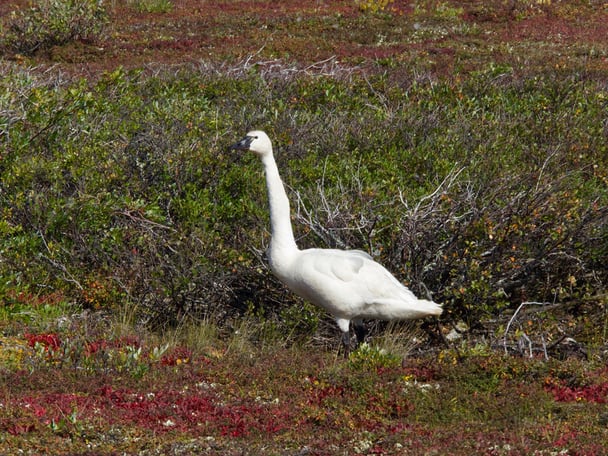 Named the Tundra Swan, the Churchill tundra is the perfect place to spot this species. Tundra Swan's return to Churchill in spring-summer like many other birds to breed and raise their young. They are often spotted in pairs near ponds, marshes and lakes in the area. These beautiful and elegant birds are known to have a whistling call. 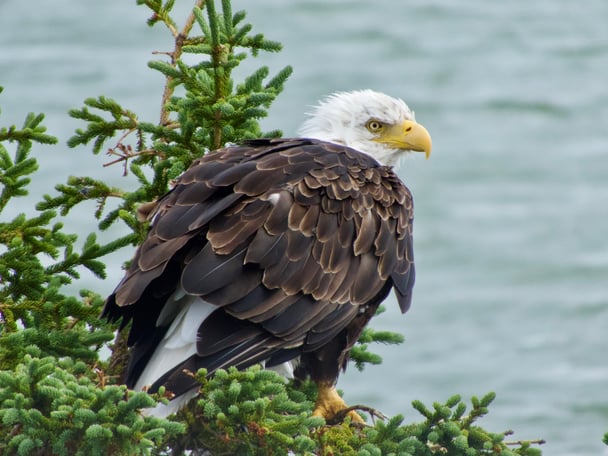 Majestic and powerful, this iconic bird is always a thrill to spot out on the tundra. Bald Eagles are one of two eagle species that can be spotted in the CWMA as their relatives Golden Eagles, also frequent the area. Juvenile Bald Eagles can even look like Golden Eagles from afar but their unfeathered legs are a good way to tell the difference. These raptors are most likely to be observed perching on a rock or a flag tree, scanning over the tundra for their next meal. 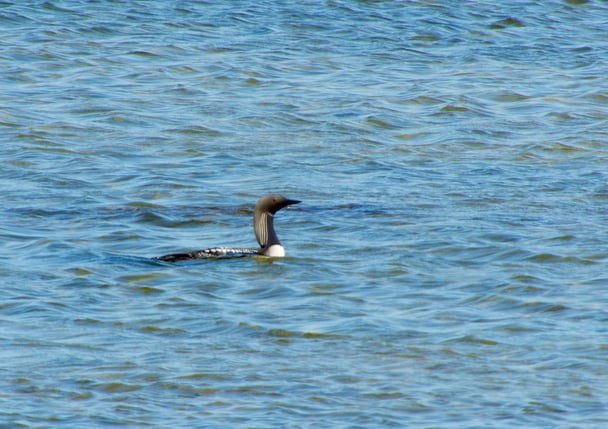 Pacific loons are gorgeous birds that return to the Churchill area in spring-summer. They are most often spotted on some of the inland lakes and ponds around Churchill and throughout the CWMA. If you spot one Pacific Loon, there is a very high chance of another one nearby as these birds are most often found in pairs. Some fortunate guests may even get to hear the haunting call of a Pacific Loon. 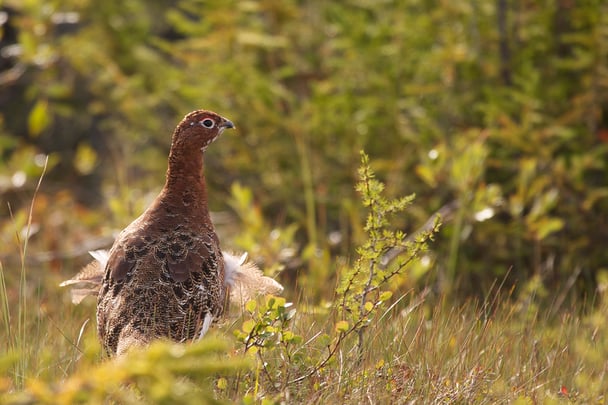 Willow ptarmigan are a common sight in the CWMA but can be tricky to spot at first as these birds are phenomenal at blending into their surroundings. If you spot willow ptarmigan you will most likely notice them slowly walking along and eating buds of willows and insects as they forage around for food. Where one willow ptarmigan is observed there is bound to be more right around as they are seldom alone. 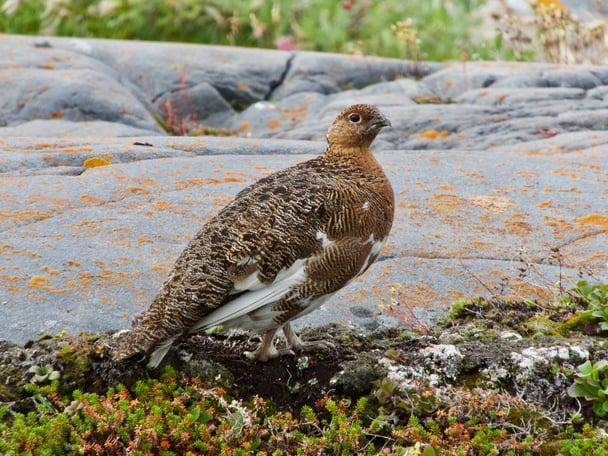 Rock Ptarmigan are very similar to Willow Ptarmigan, and it often takes an expert eye to tell the difference between the two species. The two species often tend to nest very near each other, and there have even been records of hybrids. One interesting fact about Rock Ptarmigans is that the males usually take longer to transition from their winter to summer plumage than females. This makes the males more visible, standing out as a stark white as the females blend in and sit on nests.

Arctic Tern are impressive birds that undergo migrations from nearly pole to pole each year, making round trip migrations around 45,000 miles! They have the longest migration path of any bird. Arctic Tern return to Churchill as it provides them a bountiful food supply and nesting grounds to raise their young. They often enjoy feeding on small fish known as capelin as pictured in the photo above.

Each summer, thousands of Snow Geese migrate back to Churchill, descending upon the tundra in large quantities. The stark white plumage of adult snow geese makes them easy to spot as they stand out from the green tundra landscape in summer combined with the cacophony of honking they are hard to miss. If you spot some snow geese, good odds they have also spotted you, as these birds need to be on high alert at all times. There are many predators that would like to take advantage of a snow goose nest or nestling as a snack if given a chance. These predators include but are not limited to arctic foxes, red foxes, snowy owls, Parasitic Jaegers, grey wolves, bald eagles and polar bears.

Male Common Eiders are known for their crisp black, white and yellow breeding plumage, as pictured in the photo above. The Common Eider is the largest duck in Canada. Common Eiders prefer to build their nests on ponds and bodies of water around the tundra in the CWMA. These birds make daily trips to the Hudson Bay to feed on mollusks, crustaceans and other invertebrates.

Ready for some wildlife action?

Want more wildlife? Here's a rundown of some of the other wildlife that can be seen during a Churchill summer:

Ready for some wildlife action?